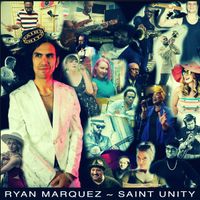 You are invited to celebrate the release of "Saint Unity", a monumental, collaborative work by jazz pianist/songwriter Ryan Marquez featuring 20 of STL's finest musicians. Anchored by the rhythm section of Tim Moore (Drums) and Theo Harden (Bass), The night will feature an intimate live performance of Ryan's originals/arrangements featuring vocalists Anita Jackson and Lola Kristine, with Tim Moore on Drums and Jordan Brewer on Bass.

The new jazz/pop release “Saint Unity'' from Ryan Marquez incorporates the spirit and larger narrative of the current artistic renaissance and cultural climate present in St. Louis. Produced by the legendary Carl Nappa and Lenny Mink for Lotown Records, the album features 20 vocalists and musicians powering Ryan’s originals and jazz interpretations of hits from the world of rock - including songs from Smashing Pumpkins, 311, The Beatles, and more. Mr. Marquez sits squarely in the center of the upswing of creative energy in St. Louis, and brings together an all-star team of musicians in the name of “Saint Unity”. The album will be available digitally on 9/3/21

Anita Jackson’s voice has recorded and performed in support for such artists as Bette Midler, Patti Austin, Mariah Carey, Erykah Badu and is heard on Cissy Houston’s Grammy winning gospel albums "Face to Face" & ”He Leadeth Me”. A featured actress with the St. Louis Black Repertory Theatre, Anita's storytelling virtues shine through her soul captivating performances. Ryan and Anita have performed and recorded regularly since 2018.

Known as “the little girl with the big voice,” vocalist, pianist, songwriter, Lola Kristine staggers audiences with the depth of soul she possesses in both her timeless songwriting and penetrating voice. A Top Ten Finalist in the 2015 Wildflower! Songwriting Competition, her vocal session work can be heard in DC’s Legends of Tomorrow series. Lola performs nationally and records regularly with Ryan.